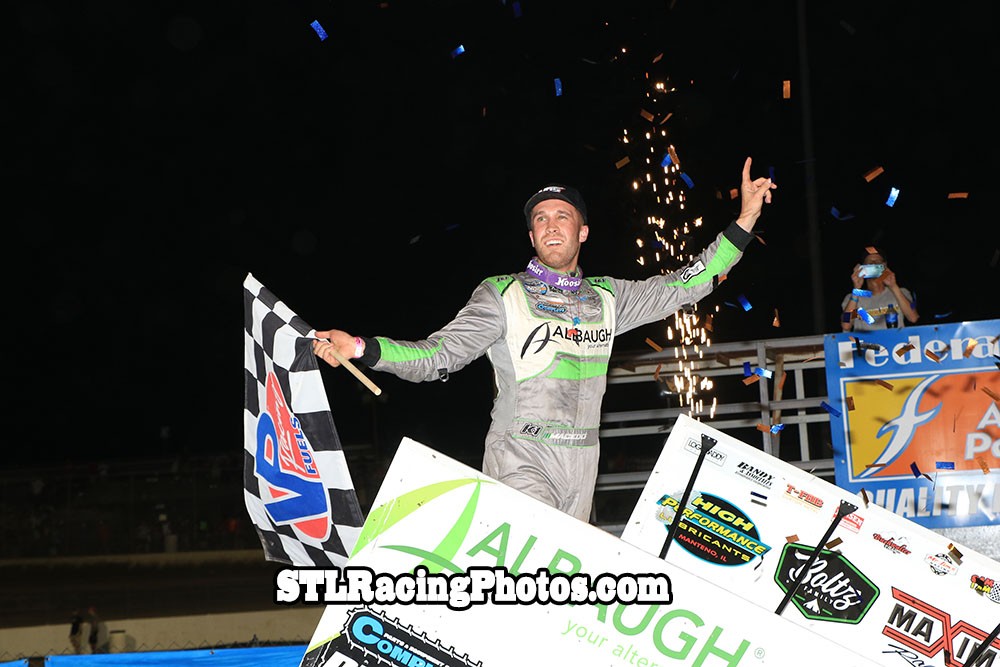 World of Outlaws Sprint Cars to Battle 55 Laps for $20,000 on Saturday

PEVELY, MO – August 5, 2022 – The check was all but written in Brad Sweet’s name on Friday when Carson Macedo came out of nowhere, threw a slider from St. Louis, and pulled off an all-time stunner to steal the win on the Night Before the Ironman.

After controlling the first 29 laps at Federated Auto Parts Raceway at I-55, “The Big Cat” appeared poised to complete a clean sweep of the evening and bank his third World of Outlaws NOS Energy Drink Sprint Car Series win of the 2022 season. The only problem is they don’t pay you for the first 29 laps, they only pay you for those final few feet at the checkered flag and that belonged to Macedo’s Jason Johnson Racing #41.

Capitalizing on bad positioning in lap traffic, Macedo chopped the gap down from 0.753-seconds at the white flag to virtually nothing when he went full send into turn three and committed to clearing the three-time and defending Series champion. It all worked out, though, as he hit the grip, slid across Sweet’s nose, whipped it under the lapper, and crossed the checkered flag while most fans in attendance and those watching on DIRTVision were still trying to process what happened.

It was a move that electrified the Pevely, MO crowd, sent social media into a frenzy, amped up the #41 camp, and dejected the #49 team. There were the highest of highs, and lowest of lows, and the reasons why it’s called The Greatest Show on Dirt.

“There was a little bit of luck involved there,” Macedo acknowledged on Sweet being held up. “I saw him get caught up and then spin the tires down the backstretch and I knew there wasn’t much grip up top where he was pointed. I had been doing it for much of the race where I’d run into turn three as hard as I possibly could to the center and find a little strip of grip with my right rear. That would get me to center off and from there I could just hope he was flustered and couldn’t cross me.”

He’s now won back-to-back World of Outlaws Features at I-55, and tomorrow chases a $20,000 payday with his first-career Ironman 55 title on the line.

“Beating Brad, a three-time champion and one of the best out here, like that feels really special,” Macedo added. “That was a really great race. It’s why we’re here, to put on amazing shows like that for you fans. This place is tough, but it’s a lot of fun. You really have to get your elbows up and get after it. Hopefully we can add an Ironman title tomorrow.”

A heartbroken Brad Sweet, who led by as much as 3.379-seconds at halfway, was vocal on his last-lap traffic incident in Victory Lane. The battle cost him his third win of the season, but he did nail down his 16th podium and extended his championship lead over David Gravel.

“All you can do is hope the lappers race you with respect,” said Sweet, expressing his displeasure. “I gave Marcus [Dumesny] plenty of room there and thought I would get more in return. You know he was the caution before that and he sput out by himself, and almost took us out too. Then he did that there on the last lap and I just don’t think that is how you race people. It is what it is, though, and I could’ve made some different moves to not put myself in that position. It’s unfortunate for us, but Carson did a great job. We’ll be ready to get the Ironman title tomorrow.”

Behind the mayhem up front was James McFadden with his seventh podium finish of the season in third place. The Alice Springs, NT, Australia native continues to show speed in the Roth Motorsports #83, building his momentum towards that long-awaited 99th World of Outlaws win for car owners Dennis & Teresa Roth.

“We kept it on all four wheels and that’s kind of a win with how treacherous it is out there,” McFadden kidded. “I thought I was going to bounce clear back into the trailer at one point. We had a really great car I think, but I lost too much time sliding back and forth with Sheldon [Haudenschild]. I love racing at the place, though. I reckon that the fans really had a lot of fun watching that one. We’ll come back tomorrow ready for 55 more.

Rounding out the top-five on Friday night was two-time I-55 winner, Donny Schatz, in the fourth position aboard the Tony Stewart/Curb-Agajanian Racing #15, and the 2018 Ironman 55 champion, Logan Schuchart, in fifth place in the Shark Racing #1S.

UP NEXT (Sat) – The World of Outlaws NOS Energy Drink Sprint Car Series returns to Federated Auto Parts Raceway at I-55 in Pevely, MO on Saturday, August 6. The Greatest Show on Dirt will be joined by the Xtreme Outlaw Midget Series as the 14th annual Ironman 55 concludes. Fans can BUY TICKETS HERE, or watch every lap LIVE on DIRTVision.