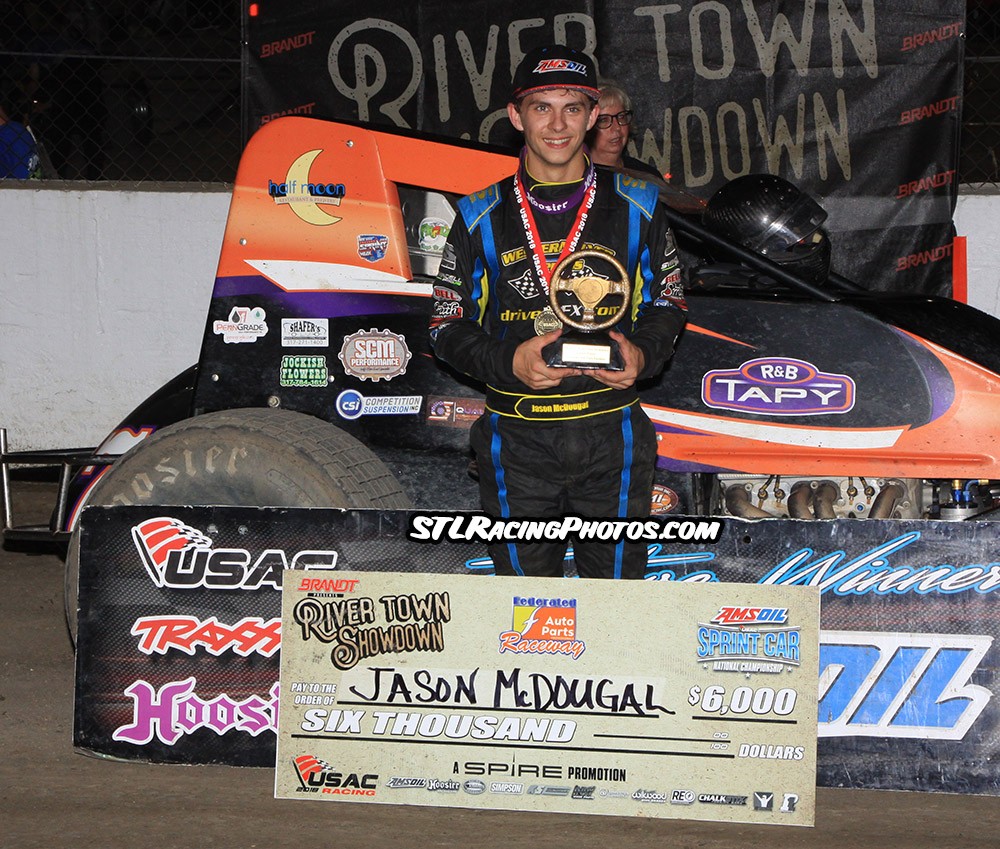 September 1st, 2018 – Pevely, Missouri………Back at the end of May, Jason McDougal moved from his Broken Arrow, Oklahoma home to the state of Indiana to further his racing career.

Sight unseen, at the invitation of fellow racer Kevin Thomas, Jr., McDougal became roommates with Thomas and his wife Whitney at their home.

It’s been quite a run for McDougal who has quickly made a name for himself in the USAC ranks over the past handful of months, an opportunity he said wouldn’t have been possible had it not been for the driver he defeated on night two of the Brandt “River Town Showdown.”

“It was actually his idea for me to be here,” McDougal explained. “He gave me this opportunity, honestly, to be doing this right now. Without him, I wouldn’t be here. I know he’s down on himself right now for losing, but I know, deep down, he’s proud.”

Initially, it was McDougal who held the point on the opening lap by mere inches as he tussled to and fro with Chase Stockon for the first three laps, with Stockon emerging at the forefront as an incident in turn three shook up the look at the front when Thomas and Robert Ballou made contact battling for the third position in turn three.

Thomas took a hop, skip and a jump before landing on all fours and motoring on. Meanwhile, Ballou took the worst of it, sliding sideways to a stop in the middle of turn three. He restarted from the tail and made a miraculous charge back through the field to a third-place finish by race’s end.

By lap 12, the leaders had hit L.A. rush hour construction zone traffic with cars spread from the inside wall to the outside concrete, leaving not much room for the frontrunners to maneuver. It would take precise precision, which Thomas used to thread the eye of the needle between Stockon and the lapped car of Chuck Walker in turn three on lap 13 to grab the lead. Stockon went down swinging, racing back to the bottom, wheel-to-wheel with Thomas until Thomas secured the position.

In the scramble, you could throw an electric blanket over the top seven, which ultimately was tail-ended by McDougal where he had dropped to and would remain throughout the midway point. McDougal steadily worked his way back toward the front, to fourth by lap 18 and to third by the 19th lap behind Thomas and now Courtney, the previous night’s winner in Granite City, Ill., who threw multiple figurative punches at Thomas with a slider in turn one on the 21st lap to take the lead before Thomas returned the favor in turn four to reclaim the spot later that same lap.

On the 25th lap, one of the most frightening incidents of the season occurred as Walker climbed the front straightaway wall and got into the catch fencing in turn one, tearing down several posts and links as he helicoptered across the track upside down with pieces and parts of his yellow racecar strewn about the property.

Walker climbed out of the wreckage and walked away under his own power with a severely damaged machine. The ensuing carnage resulted in a nearly one-hour red flag period, forcing drivers to sit, wait, and ponder what they would do on this final restart.

McDougal and the team decided not to make a single mechanical change during the open red, but there was a benefit to it all for McDougal that wasn’t associated with bringing out any tools or tool accessories.

“Honestly, having that long red kind of helped,” McDougal said. “I was getting a little tired on that long green run. I knew I had to concentrate, hit my marks and not worry about what everyone else was going to do. We had it rolling pretty good early and we were trying the top. After the first couple of laps, it seemed like it went right around the bottom and I fell back, then the top picked back up. We were pretty consistent all night around the top.”

And so, the stage had been set with the established Thomas leading the young, upstart McDougal for the final restart.

While Thomas stayed tried and true to the bottom of the track, McDougal simply threw caution to the wind and ripped the top with relentless abandon, surging past Thomas with four laps to go. Thomas hung on tightly and tried not to let go of his fading grip of the lead, but McDougal had his ride and the topside of the racetrack working in unison, like a bullet train on a monorail.

McDougal was flawless with the laps dwindling and wouldn’t be denied on this particular night, bringing home his first checkered flag with USAC. McDougal became the second driver in the last three races to pick up his first career series victory, joining fellow Okie Tyler Thomas, who won just eight days earlier at Kokomo (Ind.) Speedway.
New series point leader, by one, Thomas, finished second ahead of Ballou, Courtney and Justin Grant.

It was only McDougal’s fourth USAC AMSOIL National Sprint Car race in the No. 71p for Steve and Carla Phillips, owners of 17 series wins with Darland between 2013 and 2015.