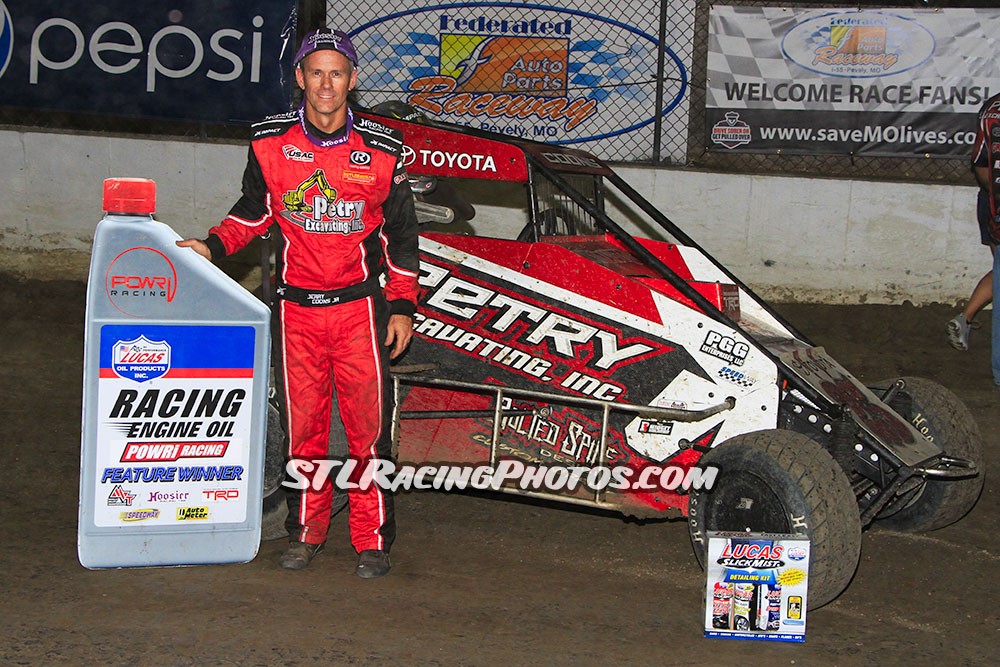 Pevely, MO – Jerry Coons, Jr. claimed victory over Holly Shelton and Tucker Klaasmeyer in the POWRi Lucas Oil National and West Midget League sanctioned show at the Federated Auto Parts Raceway at I-55. Starting outside the second row, Coons immediately took to the bottom of the high-banked 3/8 mile lurched into the lead over Tyler Thomas and Holly Shelton. As Coons rolled the bottom, Thomas took to the rim while the field battled on back.

The only caution in the 25-lap feature, Jake Neuman suffered mechanical woes and came to a stop exiting turn two. With the field returning to green flag racing, Coons quickly entered lap traffic on lap 14. Deep in heavy traffic, Coons diced his way through as Shelton followed closely. On lap 18, Shelton briefly held the lead, but Coons quickly shut the door on lap 19, leading the remaining six to victory.

“It’s been a few years. I don’t remember my last win in anything,” said Coons jokingly. “It’s great to put this Petry Motorsports car in victory lane. It’s been a long time coming. I can’t thank all these guys enough. The Spike/Toyota was running great. Got a good start fortunately and got to the bottom. I guess that’s what happens when you’re old and run the miles. You’re used to the concrete wall. We were originally supposed to be out in Pennsylvania, but Scott our car owner said let’s just come here and run. As for tomorrow night, I won’t be here. We’ve got our own Junior Sprint and my son’s going to run that tomorrow night. I really want to be with him the first time running that car.”

“Jerry was real good around the bottom,” commented Shelton. “I knew if I was going to have anything for him, it’d be in lap traffic and I got around him there for a second. I probably should have shut the door, but he’s hard in lap traffic and he’s not going to miss the bottom. The guys gave me a great car. The Sirius XM/Toyota car is on an absolute rail right now. I’m just grateful to be here.”

“I’ve got to remember to finish these races and not try to pound the fence down every time,” said Tucker Klaasmeyer. “Sometimes you’ve got to take second or third, even though you want to go for it all the time. I definitely think I was in the right spot. They were good tonight. Hat’s off to Jerry and the Petry crew. Those guys are super cool dudes and they work really hard, so they deserve some good runs. Holly’s been running up front lately. It’s just a good part of the season. Hopefully everything keeps going like this.”