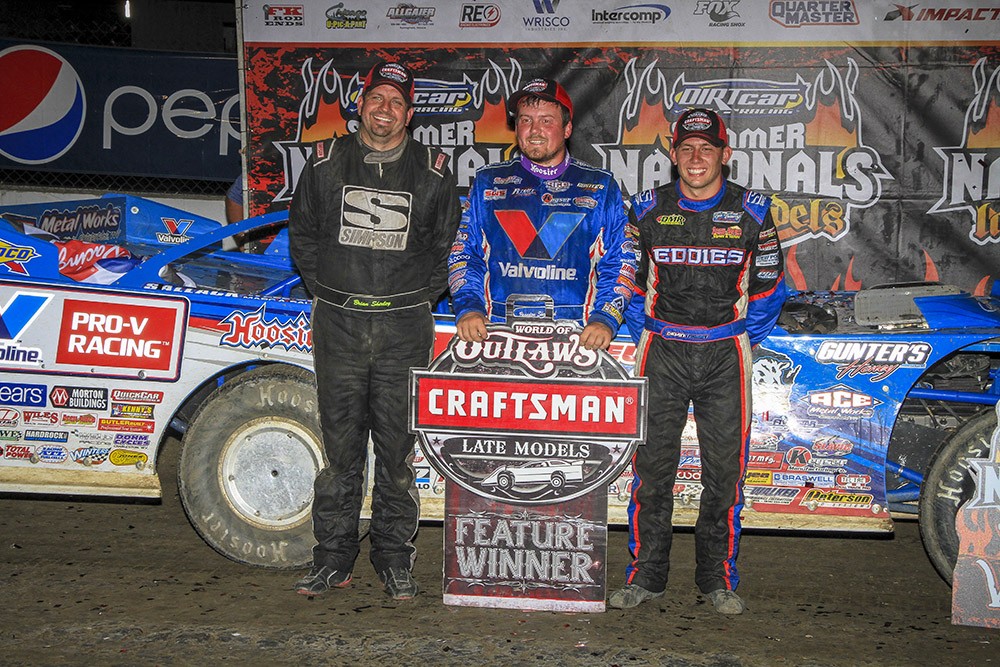 Sheppard Denies Moran at Federated Auto Parts Raceway at I-55

By Kayla May – PEVELY, MO – July 1, 2018 – Brandon Sheppard denied Devin Moran of a weekend sweep on Saturday evening at Federated Auto Parts Raceway at I-55 as he claimed his sixth World of Outlaws Craftsman® Late Model Series win of the 2018 season.

Moran settled for second but it wasn’t for lack of effort. The young gun of Dresden, OH left it all on the line on the final lap of the Sears Craftsman Feature as he pulled a massive slider in front of Sheppard as the pair exited turn four and headed toward the checkered flag.

The dauntless move brought the crowd to their feet in anticipation of the outcome. As they sprinted down the front stretch for the final time, Sheppard snuck between the No.9 and the wall to steal the $10,000 payday just 0.289 seconds apart.

“I tell you what, I think he was a little bit better than I was at the end,” said Sheppard in Victory Lane. “Me and Devin race hard all the time and we rub a lot but it’s one of those deals where he gave me a lane up there and I took advantage of that. It was some hard racing but it was a lot of fun. I wish we would come back to I-55 more often. I like this place a lot.”

After starting fifth in the feature, Sheppard commanded the lead on lap 37 by using high-side momentum to boost the Rocket1 Racing machine ahead of Brian Shirley who had relentlessly held to top spot since lap 16.

“You know, when Shirley was leading it was getting pretty treacherous down here in [turns] one and two,” said Sheppard. “It was starting to run up good and I knew I wasn’t going to pass him on the bottom and the guys told me to go for it. Mark told me I need to start taking more chances since we’re pretty far behind in the points now. At the end of the day, we’re trying to win races. That’s all we’re doing.”

Moran nearly had a picture-perfect weekend after collecting his first win of the season on Friday at Terre Haute Action Track and continuing to ride the wave throughout Saturday by setting fast time, collecting his heat win and then drawing the pole position for the main event.

“I was actually just trying to save my stuff a little bit,” said Moran. “There was a lot of tire-ware in the heat races so (crew chief) Wylie (Moran) just told me to keep them clean. I did for the majority of the race and with 15 to go it was time to wrap it up and so that’s what we did.”

“I actually messed up off of [turn] two and kind of slid out,” added Moran. “I just couldn’t quite keep up on that bottom. I felt like I was a little better on the top and Danny gave him signals to move up right in front of me on that caution (lap 46) and I knew he was going to go up there on that restart so we just hung on as much as we could and we gave it a shot.”

Shirley settled for the final podium position at Federated Auto Parts Raceway defending the spot from Rick Eckert who started seventh and Mike Marlar who started 10th. After a late race caution on lap 46 for a car who spun around in turnfour, Shirley, Eckert and Marlar battled three-wide for third for the remaining four eventful circuits.

Shannon Babb quietly finished 18th in the feature after starting second and leading the first 15 laps of the feature. What looked like would be a monumental moment for Babb in his chase for 100 Summer Nationals victories, came to screeching halt on lap 35 after he suffered from a right rear flat after making some contact with Sheppard battling for second.

The World of Outlaws Craftsman Late Model Series returns to action on Friday, July 6 at Dubuque Speedway (IA). The points race is as close as it has been all season as Chris Madden and Mike Marlar are only separated by four points in the series standings. This event will kick off a grueling five-races in nine days stretch for the Series regulars. Tickets for Dubuque are on sale now. Every ticket purchased in advance comes with a free fan pit pass.

Racing is a GO for tonight at Federated Auto Parts Raceway...