Man of Steel: Saldana Wins Inaugural Ironman 55 at I-55 Raceway 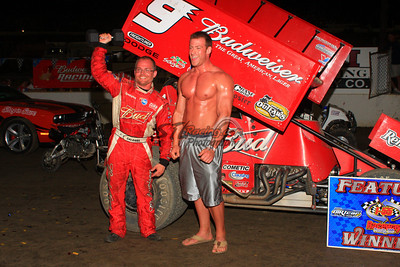 Pevely, MO August 8, 2009Joey Saldana made history in a couple of ways on Saturday night winning the inaugural Ironman 55 at I-55 Raceway in Pevely Missouri before a huge crowd, to take home the $20,000 top prize. In addition to putting his name in the record books as the first ever victor in the Ironman 55, he also scored his 13th triumph of the season which set a new career high for him with the World of Outlaws.
For Saldana the win on Saturday night at I-55 Raceway in the inaugural Ironman 55 was the 52nd of his World of Outlaws career, moving him to ninth on the all-time list one ahead current fellow driver Jac Haudenschild. It was his first victory since July 8, which was a span of 13 races, the longest he had gone this season without a win.
This is a very important race, said Saldana. Its the first one and nobody ever forgets who won the first one. Thanks to everyone for going through all of the hard work to make this event and the track preparation thats what made it a great race tonight. Thanks to the fans that stuck with us and made it happen.

Saldana started fourth in the Budweiser Maxim and moved into second on the opening lap and quickly began to chase his teammate Craig Dollansky for the lead. Dollansky entered traffic for the first time on the sixth lap and Saldana kept pace with him as they weaved their way through the slower machines. Dollansky was really held up on the 18th lap, allowing Saldana to close right in on him. On the next lap, Saldana used a textbook slide job coming off turn four to take the top spot. He would pace the field for the remaining 37 circuits enduring one more caution and negotiating traffic for most of the remainder of the 55-lapper which was co-sanctioned with the All Star Circuit of Champions.

It was a good run for us, shared the winner. We got a flat tire there and luckily we held on. We lost a race and a whole race car at Paducah (International Raceway in Kentucky) earlier this season because we blew a tire in the same situation. Im glad it held air here tonight.

The race began with Jason Meyers leading into turns one and two. A caution on the opening lap for Lance Dewease slowing on the track led to a complete restart. After a trip to the work area, Dewease who was scheduled to start on the pole had to tag the tail of the field moving third started Craig Dollansky to the pole position. He would lead from the outset with his teammate Saldana quickly moving into second.

A caution on the 30th lap led to a fuel stop, as the drivers were right up against the determined number of laps they would be able to complete counting both the green flag and yellow flag laps.

Saldana has to nurse his car late in the going as he his right rear tire had a hole in it and was going down. For the majority of the race, the second generation driver used the high side of the track just inches off the wall.

I felt good on the bottom when I got Craig (Dollansky) there in lapped traffic, noted the winner. With a flat tire, anything could happen. I just wanted to keep it spinning and keep it going. At the end getting into (turn) one I was getting real tight and almost threw it away there a couple of times.

After winning the opener of the Ironman 55 weekend on Friday night, Craig Dollansky led the first 18 laps of the main event on Saturday night and wound up finishing second in the DirecTV Maxim to earn his fifth podium finish in the last six races.

It was a great run for Kasey Kahne Racing to have both cars one and two in a big race, its pretty neat, Dollansky said. It was a good effort by both race teams. Joey (Saldana) and I were nose to tail there all the way through the race. He got me there on the bottom in (turns) three and four and it looked like the bottom was good at that point of the race. I just was on top running up there and he just snuck by us.

With very hot conditions greeting the drivers on Saturday, a number of variables came into play for each driver and team. To compensate for the extreme weather conditions, the track crew at I-55 Raceway reworked the track a couple of times, which was greatly appreciated by the drivers.

I feel very good, stated Dollansky. We had a pretty decent race car. It was tight all the way down to the finish. Hopefully it was good for the fans. I appreciate your patience with these guys reworking the race track. I know they put a lot of time and effort into it.

Danny Lasoski started 16th in the finale of the inaugural Ironman 55 and worked his way to the front of the field to score a third-place finish in the Caseys General Store JEI.

We really had a fast car, said Lasoski. We knew that both the Kasey Kahne cars would be up on the fence and we locked our car for the bottom. Thanks to Ray (Marler) and his crew for working this track and making it like it was. Kenny Schrader is a racer and Ray Marler is a racer. I used to work for him before I started racing. To have this race here at what is the best track in Missouri is a pleasure, especially being from Missouri.

Lasoski made up a significant amount of ground over the last few laps of the race, after falling back to 18th over the course of the first 20 laps of the contest. From this point on, he patiently and methodically worked his way to the front. He moved into the Top-10 on the 42nd lap and raced into the Top-Five with just 11 laps remaining.
You had to think about how tight you wanted your car with the 55 laps, explained the 2001 World of Outlaws champion. We got our car right and I would have liked to have had a caution to have seen what I was like with those two guys, because they were out there pretty good.

Donny Schatz rebounded to finish fourth in the Armor All J&J, after a 2-spot penalty was incurred when a crew member was still on the track by the car after the allotted time had expired during a fuel stop with 25 laps remaining. Jason Sides was fifth in the Wetherington Tractor Service Maxim, with Stevie Smith sixth in the Zemco Speed Equipment Maxim.

Jac Haudenschild was seventh in the Owens-Corning Fiberglass Maxim, with Tim Shaffer coming all the way from the 22nd starting spot to finish eighth in the Kistler Engines J&J to earn the KSE Racing Products Hard Charger Award. Kraig Kinser was ninth piloting the Bass Pro Shops Maxim. Jason Meyers stared on the front row and faded late in the race to finish 10th in the GLR Investments KPC.

The World of Outlaws return to action on Wednesday, August 19 at Deer Creek Speedway in Minnesota for their inaugural visit to the immaculate 3/8-mile.

Share
Previous Tim Hancock claims UMP DIRTcar Modified win at I-55 Raceway!
Next Ironman 55 Will Return Again to I-55 Raceway in 2010