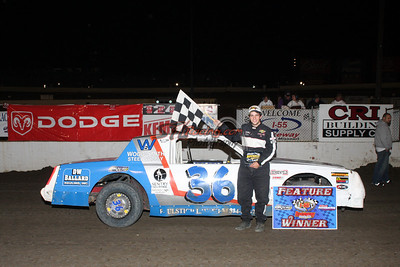 CLICK HERE FOR MORE PHOTOS FROM THE UMP DIRTcar ROUNDUP AT I-55 RACEWAY!

PEVELY, Mo.  Oct. 17, 2008  A second consecutive night of non-stop speed and thrills on Friday at I-55 Raceway kept the momentum rolling in the inaugural UMP DIRTcar Roundup By MyRaceLife.com, with two of eight divisions crowning event champions.

In all, it was a busy night on the track that eventually gave way to the Party in Pevely in the pits and campground that lasted well into the evening, especially near Randy LaJoies setup on manufacturers row:

UMP DIRTcar 4-Cylinders  Jason Crump used the pole position he secured on Thursday to his advantage on Friday as he led from green to checkered flags to become the first UMP DIRTcar Roundup Champion of the inaugural event. Crump turned 10 smooth laps to hold off Gerald and Jacob Buechting, half of the Buechting family in the feature. Ive been working on this thing for last two weeks straight trying to get it right, Crump said. Ive struggled for the past month and a half here. It feels good to get it right. Ive got to thank everybody that helps me, all my sponsors, my wife and kids for supporting me through this. I work on this thing endlessly and race as much as I can. I want to thank UMP DIRTcar Racing for putting on this show and having us out, I appreciate it. Well definitely be here next year. Ill definitely be looking forward to it.

UMP DIRTcar Factory Stocks  Danny Ems proved that securing the pole position for the feature was pivotal. Ems used the front starting position and clean air to pull away from the field as the green flag flew. Ems, who won his heat race on Thursday night, showed the same dominance in the 15-lap feature event on Friday and became the first Factory Stock UMP DIRTcar Roundup Champion. This car me and my dad built a long time ago and won a championship with it. I wouldnt change a thing about it.  Id like to thank my sponsors, and my family, pit crew, everybody.

UMP DIRTcar Pro (Limited) Modifieds  In a race to set the stage for Saturdays 20-lap finale, newcomers to the event Billy Deroy, Bill Nickelson, Kenny Harris and Shannon Burch battled closely to determine starting position in the A-Main. Kenny Francis slowed on the front stretch to bring out the first caution. On the restart, Deroy slowed while leading on the backstretch. Nickelson took advantage of Deroys misfortune to take the win over Burch.

UMP DIRTcar Pro Late Models  Eric Gowin took the early lead in the 26K machine with Brandon Moss and Bob Schmidt battling for second. Schmidt took the 2nd spot from Moss after the two waged a side by side battle. This allowed Gowin to extend his lead and capture the checkers for the event with Schmidt and Moss in tow. Pro Late Models take to the track Saturday night for their 20 lap feature event.

UMP DIRTcar Modifieds  The Modified drivers again turned in an epic battle on Friday night with Bobby Brittle, a former I-55 Raceway Modified champion, stealing the top spot on the final restart after leader Scott Weber made contact with the wall in Turn 2. Weber had led from the original green flag as Bittle stalked him throughout the 20-lap feature. Scotts a regular here, hes a great racer, Bittle said. Hes fast week in and week out. Before the yellow came out I think we were going to challenge him in another lap or two anyway but, I dont ever take anything for granted. Bittle then offered a modest challenge to Steve Arpin, Thursday nights winner who watched Fridays action in preparation for Saturdays big show. We had a good car tonight, Bittle said. Id love to give the Canadian a run for his money if we could but, that kids fast. Thanks to I-55 and UMP DIRTcar Racing for putting this event on, it was a nice event. Heat race winners included Weber, Matt Goulden and Ken Rumble. NASCAR veteran Kenny Wallace was leading the first heat when he and Weber made contact, sending Wallace into the wall in Turn 3.

UMP DIRTcar Late Models  One night after an accident knocked him out of the feature, Randy Korte rebounded on Friday and led flag-to-flag, fending off Tim Manville, Jason Feger and Thursday winner Will Vaught to take the checkered flag. Im feeling pretty good about this car so I think well be in the hunt Saturday night, Korte said. Weve had a bad last month and a half. Just to finish a race and run up front, Im happy about that. My guys worked their butts off last night and this morning. They got the car ready to go I want to thank all of them and my sponsors. If it wouldnt be for them I couldnt do this.  Heat race winners included the Racing Lawyer Denny Woodworth, Manville, Michael Kloos and Korte. Darrell Moser won the B-main.