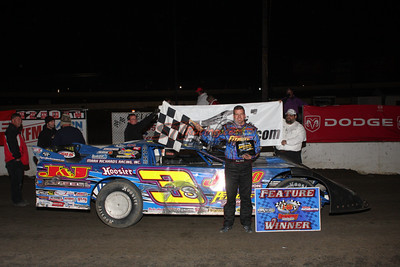 CLICK HERE FOR MORE PHOTOS FROM THE UMP DIRTcar ROUNDUP AT I-55 RACEWAY!

PEVELY, Mo.  Oct. 18, 2008  Brian Shirley, Randy Korte and Will Vaught put on a show in the finale of the UMP DIRTcar Roundup By MyRaceLife.com that nobody in attendance at I-55 Raceway will soon forget.

In the last race of the inaugural event dubbed as the Party in Pevely, Shirely came out on top of a breathtaking three-wide Super Late Model battle with Thursday feature winner Vaught and Friday feature winner Korte. The three drivers raced three-wide for the final 10 laps before Shirley used the momentum on the top side of the 1/3-mile high-banked oval to grab the checkered flag.
That feature was the culmination of a night  and week  of thrilling races. Bobby Bittle challenged Modified star Steve Arpin and came out on top, Bobby Dauderman took home the Roundup belt buckle trophy and silver plate for his Pro Late Model victory, two-time national champion Troy Naeger grabbed the checkered flag in the Sportsman division, Ken Rumble rumbled to a Limited Modified victory and Steve Maisel charged to victory in the Street Stock class. On Friday night, Jason Crump won the 4-Cylinder main event while Danny Ems won the Factory Stock crown.

The first UMP DIRTcar Roundup By MyRaceLife.com proved to be quite a success, whether it was on the track, in the pits or in the campground. The four-day festival of speed included everything from wheel-to-wheel racing to meet-and-greets with drivers to wienie roasts and chili feeds.

UMP DIRTcar Street Stock  Steve Maisel, of House Springs, Mo., started on the pole after locking up the position on Thursday night during heat race action. Maisel emerged from Turn 2 as the leader and never looked back in the 20-lap feature event. His black and white M41 dominated, much like he did in the Thursday night preliminary heat race. Maisel didnt have it completely easy throughout the weekend as engine damage Thursday night put his chances in question until fellow driver Gary Haynes stepped in. Id like to thank Gary Haynes Racing, Maisel said in victory lane Saturday night. I hurt a motor the first night here and I was out of motors. He loaned me this motor and they went out of their way to help me. Tim Feldhake worked around James Farley on the final lap to claim second.

UMP DIRTcar Limited Modified  Ken Rumble used a strong start and perservered through multiple cautions to become the UMP DIRTcar Roundup Limited Modified Champion. Rumble, a local Late Model driver, filled in for Brian Richards during the Party at Pevely. I just kind of lucked into this deal, Rumble said. I helped Todd McGraw and his car. My motor broke in my late model. I have to thank Brian Richards for this ride. This is a good racecar and he just lacked the funds to go A-Modified racing. A native of House Springs, Mo., Rumble became the second driver from the town to become a DIRTcar Roundup champion. Rumble led the duration of the event as Dan Bimson and Rick Conoyer rounded out the Top 3. I think Im going to sell my Late Model and build a new modified, Rumble joked afterward.

UMP DIRTcar Sportsman  Troy Naeger, the 2006 and 2007 UMP DIRTcar Sportsman National Champion, added yet another accolade to his list of accomplishments in becoming the UMP DIRTcar Roundup Sportsman champion on Saturday night. Naeger, who also has been the Sportsman track champion at I-55 Raceway, held off a strong contingent of Sportsman challengers to wrap up his racing season. It sure feels good going into the offseason, he said. Jeff Herzog, the 2008 track champion, moved through the pack while Gary Haynes made use of his great start and quickly moved into second spot. Herzog moved to the inside in the closing laps to steal fifth from Danny Ems. Naeger would ultimately take the victory with Haynes, Trey Harris, Herzog and UMP DIRTcar Roundup Factory Stock Champ Danny Ems rounding out the Top 5.

UMP DIRTcar Pro Late Model  Dustin Griffin and Caleb Ashby led the field to green flag as Bobby Dauderman looked for a lane to move forward. Shawn Rayfield and Dallas Bennett collided in Turn 1 and six cars slid into each other on the backstretch off of the restart, giving Dauderman a chance to plot a move forward. On the restart, Dauderman goes three-wide with Ashby and Dillan White before Ashby slides ahead to challenge Griffin for the lead. Ashby would eventually grab the lead as Dauderman methodically works forward. The two swapped the lead in traffic before another caution gave Dauderman the opening he needed. Dauderman used a slide job in Turn Four with 3 laps to go to take the lead from Ashby and drive to the checkered flag. Ashby and Griffin rounded out the top three. I figured he would be moving down but I was prepared to go wherever he wasnt, said Dauderman, who caps off an excellent year for himself in claiming the DIRTcar Roundup Championship. The car was good all night. I just have to thank all the guys who help me every week. Its pretty awesome. Ive had a pretty awesome year and this tops it.

UMP DIRTcar Modified  Bobby Bittle celebrated his 20th year of competition in 2008, and he closed out the season in thrilling style. After taking the checkered flag on Friday night, the Belleville Bullet became the only driver to win two A-mains during the Party in Pevely. Starting from the eighth position, Bittle charged to fourth and reeled in Tim Hancock. A couple of cautions helped put him in position to attack the leader and hold off his competitors down the stretch. Bittle was followed to the line by Tim Hancock, Mark Miner, Kenny Wallace who climbed from 22nd to 4th, and Ray Walsh. Its a ball when the track like that, Bittle said. I was having a heck of a time out there, I was having a lot of fun. The car was working perfect. When I got the white flag I had one hand on the wheel and the other hand out the window. Thanks to the officials who put this deal together. For us to go out and win two out of three of them and win the final night it was huge. This is our 20 year anniversary and this is the biggest win since weve been racing.

UMP DIRTcar Super Late Models  Brian Shirley knows how to get around I-55 Raceway, and the native of Chatham, Ill., needed every bit of that experience to claim the inaugural UMP DIRTcar Roundup Late Model championship. Starting on the outside of Row 4, Shirley battled early with young shoe Kyle Steffens and Tim Manville. I had a good feeling coming back tonight, I dont know what it was, said Shirley, who locked himself into the feature with at top-five run in Thursdays preliminary feature. Shirley used the high line to quickly move into third place. A little patience paid off as he tailed the lead duo of preliminary feature winners Will Vaught and Randy Korte. Shirley stalked the leaders through traffic as they swapped positions repeatedly. Shirley would eventually make a move to the lead around the outside of Vaught only to have a late caution drop him back to second. I knew if I ran my own race wed be ok, he said. Its just nice to be winning. On the final restart, Vaught used the low line, his strong suit throughout the race, but it wasnt enough as Shirley built momentum on the lightning fast cushion and shot past Vaught. Its different than what we win most of the time, Shirley said of the Roundup Silver Plaque and Buckle awarded to him in victory lane. I thought it would be really neat to win one of these.