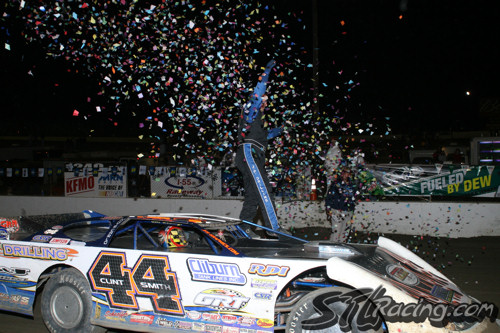 With a dramatic victory in Saturday nights 25th annual Pepsi Nationals at I-55 Raceway, the Southern gentleman put himself squarely in the headlines of another World of Outlaws Late Model Series trip to middle America.

Its fun to win in some new territory, said Smith, whose road victories this season have helped increase his popularity away from his native Southeast. Weve won in three different states for the first time this year, and were proud of that.

Smiths latest victory was easily his most difficult. He had to outduel a pair of 2006 UMP DIRTcar Racing champions  Summernationals titlist Shannon Babb of Moweaqua, Ill., and national champ Randy Korte of Highland, Ill.  in a rousing shootout over the races final three laps to preserve his 10th career WoO LMS win.

Smith never relinquished the lead after driving his J&J Steel/Cliburn Tank Lines GRT car by Korte for the position on lap 23, but both Babb and Korte made aggressive bids to overtake Smith following the second and final caution flag of the A-Main, on lap 47.

Babb, 33, used the extreme high side of the one-third-mile to slide from fourth to second after the final restart, but he fell short in his attempt to steal the win from Smith. The driver of Billy Moyer Sr.s Car City Rayburn mount crossed the finish line 0.702 of a second behind Smith.

The 42-year-old Korte, who led the first circuit and laps 9-22 after starting from the pole position, settled for third in his TMCI Transportation Rocket.

Completing the top five was Chub Frank of Bear Lake, Pa., in his Lester Buildings Rocket and WoO LMS points leader Steve Francis of Ashland, Ky., who started from the outside pole and led laps 2-8 in his Valvoline Rocket.

Smith, who started third, used one of the slight imperfections he discovered in the surface of NASCAR star Ken Schraders track to assert control over the field.

There was a little hole in (turns) three and four where I was able to get my biggest advantage, said Smith, whose only previous start at I-55 Raceway was a 16th-place finish in the 2005 Pepsi Nationals sanctioned by the WoO LMS. If I could charge it hard and catch it just right with the right-side tires, it would scotch my car.

Korte and a couple other guys were missing that hole  or they just werent seeing it  so theyd drift all the way to the top (of the turns) and lose momentum. But I could hit it and turn to the bottom off of four and just cook the front straightaway.

That was probably the difference all night  I could get my car to turn in the center of the corner and come off in the wet really full throttle. Even off turn two I was really good; thats where I could set em up to make a pass in three and four.

Smith wasnt happy to see the caution flag fly on lap 47, however.

I knew a couple of guys behind me, like Babb (who restarted fourth), had 20s (tires) on, said Smith, referring to the softer compound of the UMP DIRTcar Racing Hoosier 20/40 tire rule, which was in place for Saturday nights event. I knew they were gonna fire pretty good  and they did.

Smith, who ran the harder 40-compound rubber, saw Korte duck underneath him a couple times following the restart. And on the final circuit he repelled a bonsai charge by Babb, who charged around the outside of Korte for second off turn two on the final lap and then attempted to slip by Smith at the other end of the high-banked oval.

I was running the middle the whole time, but I probably went in a little too high for (Babb) the last lap so he didnt know where I was going, Smith said when asked how he preserved his victory. Then I cut to the bottom and got my full gas off the corner (to the checkered flag)  and aint nobody gonna pull you when you leave at full throttle with the motors we have today.

That RaceTek in the car, its one of his 441s, and its a killer. We knew if we could get it hooked up, aint nobody gonna pass us at full throttle.

The victory broke Smith out of a modest slump on the WoO LMS. He had been winless on the tour since July 3 at Lebanon I-44 Speedway  a stretch of nine races during which his points deficit to Francis ballooned from 34 to 96.

We got back a little in the points, so we tried some different setups and kinda got off our program, said Smith, who sits third in the WoO LMS points standings. Tonight we pretty much got back to square one.

Tonight we raced to win, because the points are kinda getting out of hand. Unless Francis and Chub have the same trouble I had  I fell out of three key races and it cost me over a hundred points  they pretty much have the top two spots (in the standings) locked up. Im just trying to get third-place locked down, that way I can race free towards the first two spots.

Id like to work it down to within 50 points for the last two races, Smith added when asked about his title hopes. Then wed have a mathematical chance to win the points (in the season-ending Outlaws World Finals on Nov. 1-3 at The Dirt Track @ Lowes Motor Speedway in Concord, N.C.).

Babb, who started eighth, nearly pulled off a memorable high-side run to victory after the final caution flag.

The caution just fell at the right time for me, said Babb. I was on soft tires, so my car fired real good. I thought I might have a shot (at winning) by running the top.

The top was there all along, but it was like messing with fire. You cant run more than two or three laps in a row real good, but when youve got a chance (late in the race) you just give it all you got.

Babb was virtually on Smiths rear bumper heading down the backstretch for the final time, but his momentum was slowed by Smiths race-savvy move.

I didnt know what he was gonna do on that last corner, Babb said of Smith. I followed him down the backstraightaway and he was all the way out against the fence, so I thought he was gonna stay up there. But then he dove all the way down to the bottom, and I couldnt go under him.

I think I shouldve just stayed up there (in the top groove) and followed him around (three and four). If I stayed behind him, I mightve had a better shot at it.

Korte, who won four of his six features this season at I-55 during the month of August, ran the same tire combination (hard right-rear, three softs) as Smith but didnt quite match Smiths setup.

Clint was just a little better than us, said Korte, who earned $500 in WoO LMS Bonus Bucks for being the highest-finishing driver who wasnt ranked among the top 12 in tour points and hasnt won a WoO feature. I was kinda frustrated because I shouldve run second, but Shannon pulled that off there on the outside at the end to get by us.

It wouldve been awesome to win tonight. Ive won this (Pepsi Nationals) deal before, and its always real nice to win at home  but it would have been unbelievable to win against these (WoO LMS) guys.

They knew I was here, though, and thats the main thing.

Frank advanced from the ninth starting spot to finish fourth, but he was confident he left a little bit of speed on the table.

I was soft on tires and I was trying to save em, said Frank. I didnt have a scoreboard to look at to know what lap it was, so I waited too long to make a move.

I shouldve just rolled em (the leaders) on the outside earlier. My car was better than Babbs up there, so I knew I could roll the top. I almost ran into the back of Korte and Babb on the last lap when I tried running up there.

Coming off his second win in his last three WoO LMS starts the previous night at Paducah (Ky.) International Speedway, Francis was a solid pre-race favorite. But he only led seven early laps before beginning to fade.

The racetrack was a little faster than we thought it would be, and it caught us a little off guard, said Francis, who slipped as far back as sixth before rallying to snare a top-five finish. I thought it was gonna be a lot slicker than it got in the feature. It kept brown strips in it and you could hit the strips (for traction), but we were so tight wed drive right out of em.

It was a good night, though. We got a top-five and only finished one spot behind Chub (who trails Francis by 58 points), so well take it.

Finishing in positions 6-10 was 16th-starter Rick Eckert of York, Pa., who made most of his moves forward during the races second half; Billy Moyer of Batesville, Ark., who picked up two spots after the final restart; Shane Clanton of Locust Grove, Ga.; Brian Birkhofer of Muscatine, Iowa; and WoO LMS Rookie of the Year candidate Brian Shirley of Chatham, Ill., who was surprisingly quiet at a track where hes enjoyed more success than anywhere else in his young career.

Darrell Lanigan of Union, Ky., rallied to finish 11th after pitting to change a right-rear flat tire that caused him to bring out a caution flag on lap 10.

A field of 39 cars comprised the event, which was run on a crisp, cool night that ushered in the fall season.

Francis earned a $100 bonus for capturing his third National Interstate Insurance Fast Time Award of the season. He turned a lap of 12.377 seconds  just under three-tenths of a second off Billy Moyers track record established earlier this year.

Heat winners were Richards, Korte, Clint Smith and Birkhofer, and the B-Mains were captured by Michael Kloos of Trenton, Ill., and Brady Smith of Solon Springs, Wis.

LISTEN ONLINE: If fans cant get to a track to see the series, they can experience the excitement of the World of Outlaws Late Model Series live on DIRTvision.com through the DIRT Radio Network.

To listen to the free audio broadcasts, log on to www.dirtvision.com and click on the DIRT Radio Network logo.

Listeners will need Windows Media Player 9 or higher to listen to the DIRT Radio Network. For technical support or questions, e-mail customerservice@dirtvision.com.